For the Love of Chapbooks

Back in 2007, poet Noah Eli Gordon wrote that, “From the 16th to the 19th century, chapbooks flourished as a locus of popular culture, religion, folklore, myth, history, poetry, and story; for many, they were the sole link connecting them to the events of the day, and, implicitly, to a sense of personal identity.” in his article “Considering Chapbooks: A Brief History of the Little Book” in Jacket 34. Historically, chapbooks were sort of like our present-day Facebook pages, Tumblrs, and tweets.

For better or for worse, the brevity and speed of information has become increasingly attractive to even the most dedicated readers of poetry and prose. When I first discovered, years ago, sites like Verse Daily and Poetry Daily that feature a new poem every day, I felt less guilty for not having read everything on my professors’ bookshelves because at least I up-to-date with contemporary work. Now, you can check out numerous WordPress blogs that have been designed like print-based literary journals and magazines and feature both well-known and “emerging” writers.

I think it’s fantastic. I admit, I’ve purchased books, even poetry books, on my kindle. I read books as pdfs. But even me–someone who sits at a computer most of the day creating digital content as my job–prefers to hold a beautiful book, flip through its pages and trace the text with my fingertips. For me, some of the most satisfying reading experiences are those little books, hand-sewn together with purple waxy hemp or fishing line. My first chapbook, One Petal Row, published by Tinfish Press (2011), was part of a retro series of slim black-and-white printed books, stapled together and sold for 3 bucks. Now you can download the book for free. My second chapbook, The Anyjar, published by Highway 101 Press (2011), had a cover where the designer used my own handwriting to create a journal-like feel. I love both of them.

I personally love the chapbook form for its portability. I’m a fan of anything that entices readers to keep poems close to their hips and their hearts. As most of us have heard before, the size of the thing isn’t important in the realm of love nor in the world of art-making. But the labor that goes into making a chapbook is no small task.

Some of my favorite chapbook publishers post pictures and social media status that make me feel utterly useless with my hands. Shanna Compton is one of those people. She is the editor of Bloof Books and creates stunning chapbooks that, once in your hands, you can tell they’ve been made with deep affection. As soon as I received Dawn Sueoka’s chap, Little Uglies, I dropped everything and started reading. In an interview with Bruce Covey, editor of online lit journal Coconut and Coconut Books, for Boog City, Shanna says that she hand stitches each one (although has run a few through her sewing machine). Two Sylvias Press also makes beautiful brightly colored books and Finishing Line Press creates gorgeous glossies with thick spines (I just received one from Honolulu-based writer and activist Amalia Bueno, who recently published her first chap with FLP, called Home Remedies).

Tomorrow, I am THRILLED to read at Revolution Books in Honolulu with fellow chapbook author Rajiv Mohabir, a kick-ass poet and translator, who has three multilingual chapbooks under his belt, A Veil You’ll Cast Aside, na mash me bone, and na bad-eye me. He will be reading from his newest chapbook by Ghostbird Press, called Acoustic Trauma and I will be reading from my latest chapbook, Gertrude’s Attic, published by Vagabond Press. 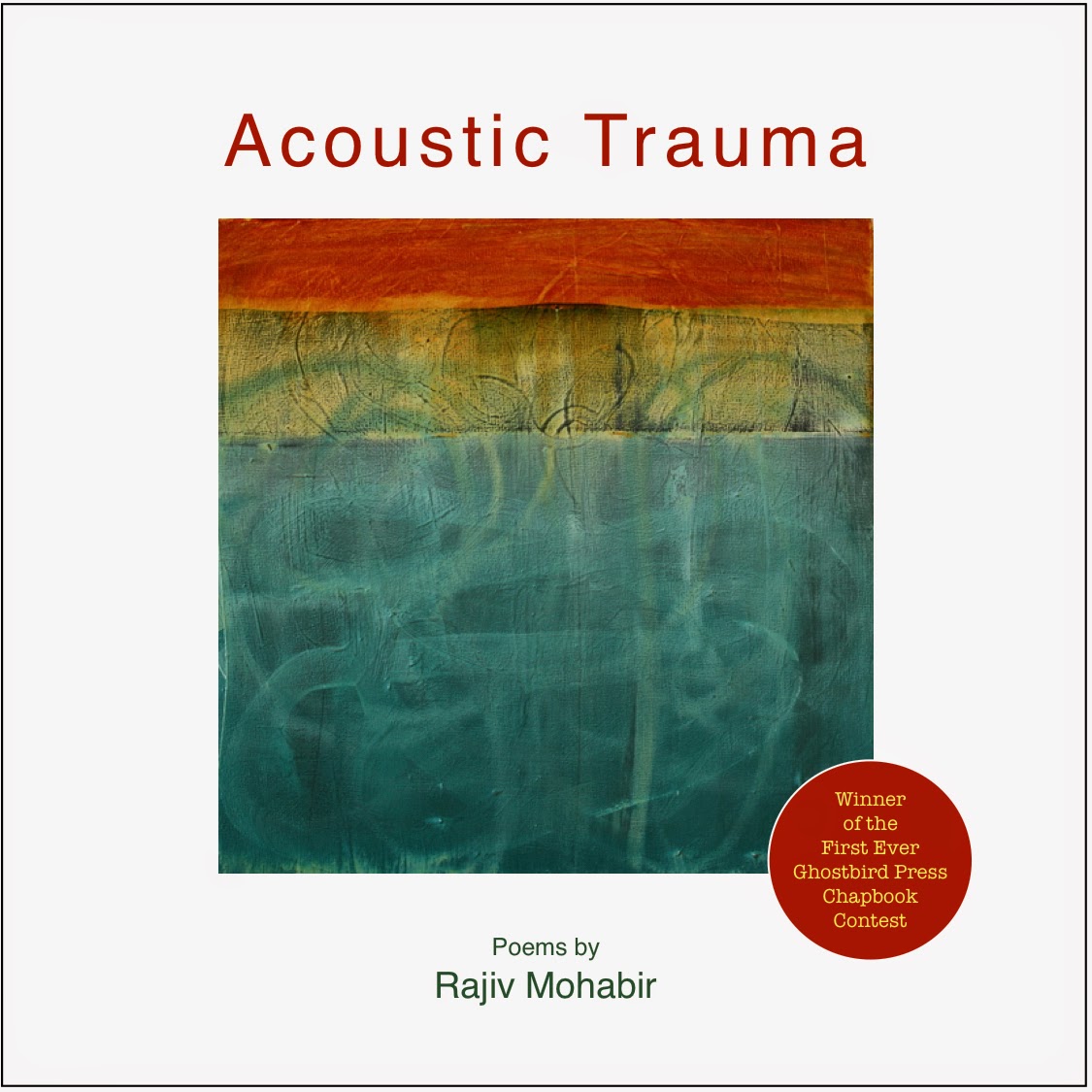 Below is a short interview I gave with poet and fiction writer Joseph Han, curator for Mixing Innovative Arts, which holds its monthly reading series on the third Monday of every month at The Manifest in downtown Honolulu:

How did Gertrude’s Attic find a home at Vagabond Press? Could you talk about the deciBels series that the book is a part of?

It wasn’t so much that Gertrude’s Attic found a home at Vagabond Press, it was more like Gertrude’s Attic became a manuscript because of Vagabond Press. One day I got an email from Pam Brown, the editor of the deciBels series from Vagabond, an Australian-based publisher, asking if she could publish my new work in a 40-page or so “booklet.” I’m a big fan of the chapbook form, and so I was obviously elated.  Once I said I’d love to be part of the deciBel series, I started writing the inchoate “new work.”

I have to admit, I didn’t actually know any specifics about the dB series was until I got my proofs. I knew there would be ten poets included in the series, writers from all of the world–Victoria, Hawaii, Queensland, Washington, New York, Sydney, and Aotearora. All of us have very different approaches to form and set out to tackle various subjects. I imagine that the dB series began when Vagabond’s iconic Rare Objects series (which is AMAZING) ended in 2014. It’s my understanding that dB will continue in Vagabond’s mission to publish a series that is “transnational, working across styles and categories.”

I understand that you’ve studied Gertrude Stein quite extensively. What drew you to her work and how/when did the book start coming to life?

Well, extensively might be overselling my Steinian knowledge. But, I did choose good ‘ol Gertrude’s oeuvre as an area of study for my PhD area exams. I was initially drawn to her work at the very end of my MFA program back in 2008. Actually, Gertrude Stein and Catherine Wagner changed my writing completely — one week before my thesis was due, I rewrote my entire manuscript because I was so head over heels in love and inspired by the way they played with sound and syntax. Even the critical portion of my thesis was about how Frank O’Hara and Gertrude Stein use immediacy and perception as containers in their work.

I didn’t expect to continue studying Stein during the PhD program, but the more I read about her, the more intrigued I became. She is perhaps the best marketing genius in the poetry industry of all time, maybe even better at marketing than writing poems. She is also the worst Jew of all time, definitely worse than I am. But I don’t think that answers your question.

The first poem I wrote that inspired Gertrude’s Attic was a villanelle that was published in Unshod Quills, called “A Substance.” I constructed the villanelle by using lines from Gertrude Stein’s extremely long prose poem “A Substance in a Cushion” from Tender Buttons. I wrote other forms too, using different lines from Stein’s poem, which ended up making it into Gertrude’s Attic. Because I was thinking a lot about Stein at the time, as I was preparing materials for my dissertation, I wanted to write poems to help me ask questions about her celebrity and her work.

The description of your book explains, “These poems are experiments in the shape and sound of memories, inspired by Gertrude Stein’s ‘portraits,’ particularly those written during World War II.” What was the most challenging (or easy) part about working with these portraits? Could you describe the early stages of the writing process and how the book developed until completion?

The most challenging part was trying to avoid straight-up imitation while also invoking a very recognizably Steinian modernism. I will also say that it’s difficult to use someone else’s work–especially if that work is so obviously recognizable–and make it somehow new and personal. When I started writing, I was only using Tender Buttons as my source text, but then I started to pick up on some of the themes in Stein’s other work, especially her novel Ida and memoir Wars I Have Seen. Both texts have peculiar ways of addressing ordinary human experience in a terrifying world, or extraordinary human experience in an ordinary world.

Another challenge was that I had almost nothing written when I agreed to the project. I had only a few short months to imagine a book. It started with a villanelle, then a poem about Stein’s poodle, then I started thinking about Stein and her lifelong partner Alice B. Toklas and their almost nonchalant move from Paris to rural France during the Nazi occupation. I imagined Gertrude fretting over her Picasso collection and Alice picking vegetables in the garden while everyone else was standing in line for a rotten potato or two.

Then, I wrote this poem “Gertrude’s Attic” about my grandmother’s death, which was published in BODY, and I started thinking about how one could create something like sound-memories. Not my own, but Gertrude’s. My grandmother’s. Other women’s. And that’s when I picked up speed. I wrote until I had too many poems.

What can readers expect from the contents of the collection?

Beyond experiments in sound, hopefully readers will find moments of humor and deep sadness in these poems. Readers will also find that almost every poem was inspired by or created from a variety of source material from Stein, not only Tender Buttons, but also Lifting Belly, Stanzas in Meditation, Wars I Have Seen, and her book of essays How to Write.

How would Stein react to your book if she read it?

She would probably say something like “Of course the cow is written my little dog. I is she not a cow or masterpiece.”

On another note, congratulations on defending and finishing your Ph.D.! Could you talk about your dissertation and where you’re taking it from here?

Thanks! Well, my dissertation is a feminine epic called Cleave, a feminine epic. It’s a strange manuscript about the Shekinah, the female divine presence of God, according to the Old Testament. In it I give the Shekinah a written history–something lacking in the biblical text. It’s about how God severed from his female counterpart and what happens when the Shekinah is given agency as she dwells upon earth. “Cleave” is about being pulled apart as much as it is about clinging to. So, the manuscript is also personal in that it navigates an uncomfortable religious space for me, growing up as Jew who in her adult life has completely lost the sacred connection associated with her upbringing.

I’m still revising (always) Cleave, but I have been thinking about publishing pieces of the manuscript in the near future. I have one poem from the manuscript on Moss Trill, called “Shape.” Selections from Cleave will appear in an upcoming issue of The Feminist Wire an anthology called Feministing the Epic. I’m excited about both.

I’m working on some poems about a couple named Astrophil and Stella. I think the poems will be set on the moon, post-apocolypse and the main themes will be depression, love, female energy, and the evolution of humans into ice-people. Or, something like that. It will probably be a chapbook.